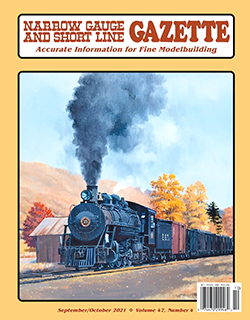 SEPTEMBER/OCTOBER 2021: This issue, Adrian Garner describes his unique 7mm scale American Magnesium Monorail locomotive and yes, it runs. Bob Bennett surveys his roster of On30 railcars, and Johnny Graybeal continues his series on East Tennessee & Western North Carolina locomotives with No. 28. Peter Replinger has an article on the Santa Cruz Lumber Co., while Mike May shows you how to make animated switch stands. Gregg Condon, MMR, shows how he added tall grass to his layout, and Dan Windolph continues his series on building an On3 Jull snowplow. All this and more in the September/October 2021 Narrow Gauge & Short Line Gazette!

Over The Rails By Internal Combustion

by Bob Bennett — My On30 Roster Of Railcars.

The East Tennessee & Western North Carolina Railroad And Its Locomotives

by Mike May — Bending Iron.

Maintenance Of Way Equipment On My On3 Colorado Central & Southern

by Charlie Getz — A Tale Of Two Mines Building The Master Creations Old Rose Mine Kit.

Pigeon Hole — Letters to the editor