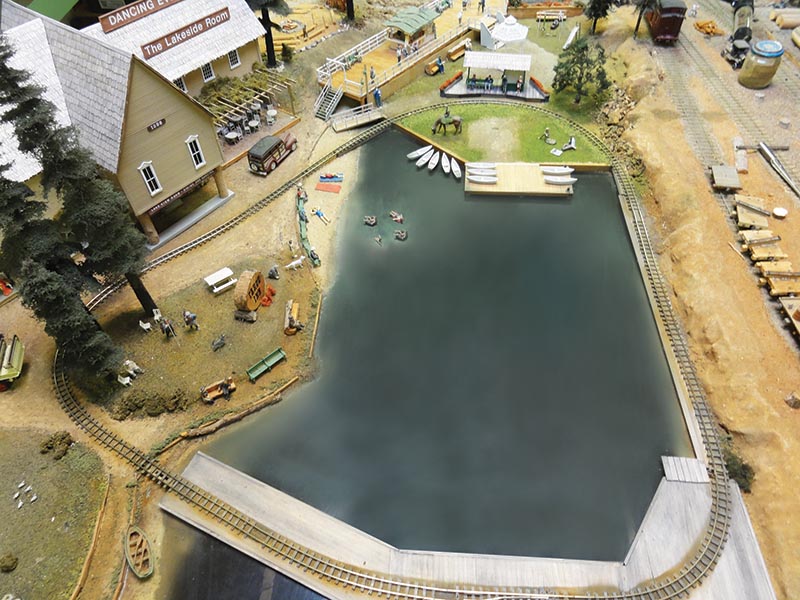 The author’s entire 15-inch gauge park railway shows in this photo. The new depot is in the top center. If you look carefully, you can see the fire circle just to the right of the hotel. That green-roofed building just to the left of the depot is the hotdog stand. Note the decked trestle in the lower foreground, and the putting green at the left, next to the two tall trees.

Larry Gant mentions in his article about his Gn15 layout on page 20 that he wanted to add a hotel called “The Big Stone Mountain Lodge” to his layout so he could haul visitors in little 15-inch gauge passenger cars to his lodge. He also wanted to have the fun of adding a swimming pool, flowerbeds, buildings of log and stone, and cribbed walls to his layout.

I share Larry’s interest in railroads and hotels, and have two large hotels on my layout. The oldest is the Tahoe Inn, and my newest is a Civil War era hotel that I call “the DeWitt Clinton House.” Both hotels have detailed grounds around them. In addition to some 50 period-figures, the DeWitt Clinton House has a lawn, a large oak tree with a bench around its trunk, and several flower-lined paths for strollers. There is also a detailed blacksmith shop, a garage full of wagons and carriages, and an O scale Edwin P. Alexander model of the DeWitt Clinton steam locomotive on a plinth.

I built my Tahoe Inn about 30 years ago. It is a large building some 40 inches long. I based it on the Tahoe Tavern that once overlooked Lake Tahoe, and was served by the 3-foot gauge Lake Tahoe Railway & Transportation Company Railroad. In the 1920s you could cross San Francisco Bay on a ferry to the Southern Pacific’s Oakland Mole, board a Pullman car, go to sleep, and arrive the next morning in Truckee, Calif. You then transferred to a LTR&T train, rode down its right-of-way along the Truckee River to the rear of the Tahoe Tavern. There you would alight from the train, and stroll into the hotel on a redwood walkway while your luggage was transferred to your room. For many years, the Tahoe Tavern was a world-class hotel with movie stars, sports figures, and other VIPs staying there.

My Tahoe Inn has an extensive park-like area surrounding it. I have had great fun over the years adding a putting green with golfers, a croquet pitch with hoops, wickets and figures with mallets, and a horseshoe pitch with O scale horseshoes. There are even “bathing beauties” on a beach, swimmers floating in inner tubes, watchers on benches near the beach, a hot dog stand, a couple having a picnic, a photographer recording a family’s vacation memories, a shooting party in the woods, a row of rail fans taking photos of the trains as they pass by, a stable for renting horses, and a fire circle where songs, and tall tales can often be heard around a roaring fire.

In spite of all of these attractions, I always wanted to add a 15-inch gauge park railway to my hotel scene. Some of those hotel guests may have needed just one more thing to do. I pondered about building this little railway for many years; it was only recently that it dawned on me how I could weave a railway in an irregular circle around my hotel’s park-like gardens. All I had to do was remove a few benches, and add a decked trestle over the end of my water scene. However, reaching into this finished scene would be difficult. I built it more than 30 years ago, and I am not as dexterous as I was then. How was I going to reach into the scene to line up rail ends in their joiners?

My answer was to buy five 3-foot lengths of PECO Crazy Track from Walthers. I already had several turnouts. This track is 9 mm gauge, designed for 4 mm scale models. That makes its gauge about 30 scale inches in 4 mm scale, or around 15 inches in O scale – perfect!

When my track arrived, I drilled holes in its ties for track pins about every 12 inches. But soon realized that I would not be able to see these holes when tacking the track in place on my layout – almost 6 feet away. So, I put a dot of white paint on each tie with a hole. Brilliant!

Next, I took a tip from the late Jim Vail, and soldered rail joiners to the ends of three sections of track, making them one 9-foot-long piece with no kinks. That’s how Jim produced such smooth track on his layout. Then I picked up the 9-foot-long piece of track. It behaved like a wriggling snake as I carried it across my layout room, and threaded it into place. After tacking it down, I connected the track’s two ends to a turnout on the deck of the trestle right in front of me – at the edge of the layout – nice and easy to reach.

I ran a spur from the turnout on the trestle to a corrugated sheet metal lean-to engine shed at the rear of the Tahoe Inn. Then I spray-painted my new track, cleaned the paint off the top of the rails, hooked up a power supply, and ran my first locomotive around the loop. I had no trouble choosing a locomotive since I had received a little red 0-4-2T from Bachmann with a Thomas the Tank Engine face on its smoke box front. She was perfect, runs smoothly, and seldom stalls. So, I plan to find some way to fit an O scale driver into her cab – or behind it. I have added a little passenger depot to my park-like area, so I will also need some passenger cars. And, Oh! The corrugated engine shed is also in place, housing my little locomotive.