New from Bachmann Trains are a ready to run, large scale, 45 mm gauge, Jackson & Sharpe coaches and combines. These cars come painted red, lettered for Denver & Rio Grande with gold trim, or in a delightful yellow ochre, lettered for Eureka & Palisade, with filigree-trimmed panels along each side, and a cream roof. The cars also come painted yellow, with a red roof, and green letter board, lettered for the Grizzly Flats Railroad. Coaches are also available unlettered in olive.

These cars have lights that pickup electricity from wipers on the trucks. The metal-wheeled trucks are detailed, and have knuckle couplers attached to them, so that the couplers swivel with the trucks, allowing the cars to go around sharp curves. A pair of LGB-type couplers is also provided. The cars’ interiors have seats, pot-bellied stoves, and toilet enclosures. The end doors do not open, but the side doors on the combines slide open and closed. The truss rods are flexible, so they will not bend, chip, or break easily. The handrails are metal, and there is minimal underbody detail.

These are robust cars, designed for rough handling on a garden railroad. They are also lettered to match the Bachmann 2-6-0’s reviewed on page 15 of the January/February 2017 GAZETTE. A Mogul, a combine, and a coach would make a nice-looking train on your garden line. 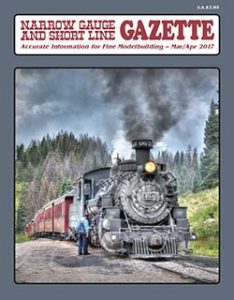