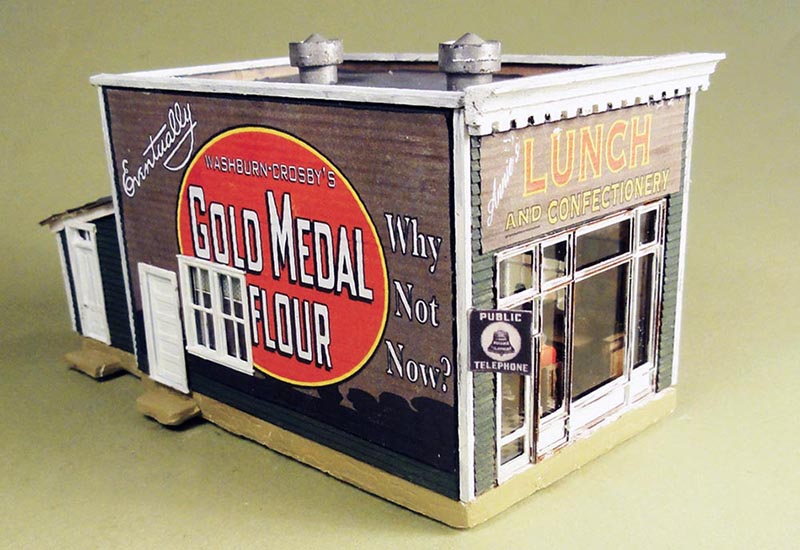 Bob Brown first reviewed this kit in the May/June 2014 GAZETTE, but did not have a chance to look at the kit. Recently, I bought one at a Chicago-area shop, and assembled it, so we thought it was worth another look.

The kit includes laser cut basswood walls, basswood strip wood, styrene windows and doors, a cast plaster foundation, and full color signs and roofing paper. The color instructions include drawings and limited text suggesting that you assemble the walls and plaster foundation before adding windows or doors. I added the bracing provided, and did as much assembly as possible while the walls were flat. Then I added the windows and doors. My kit was missing a door casting, but rather than wait for a replacement, I substituted one from my scrap box.

I also added the wall signs, thinning them as instructed so they appear to be painted on the walls. A picture of the prototype Annie’s (location unknown) shows the exact sign, pierced by the door and window. I tried to match the prototype photo with a dark gray-green color scheme similar to the wall sign’s background color, with white trim. I put weights on the walls after painting them to limit warping. If you add lighting, as I did, check the joint of the walls to the foundation for light leaks. I added a small flange of black construction paper to prevent any light leaks. Note that the wall braces also form the roof supports. I also added interior details, wallpaper, and signs. The kit comes with a lovely graphic of a lunch counter that I augmented with tables, chairs and booths populated with some customers. The large front windows, assembled from layers of delicate laser-cut wood, give a great view of the interior.

The roof is cut from thin cardstock, and I added a few more pieces of strip wood as supports and light blocks. I kept my roof loose from the walls to allow me to access the lights, and substituted fine sandpaper, painted gray, to represent gravel roofing. But, I used the tarpaper material provided on the shed addition. No ventilators or stacks are provided, which is unusual, as any café would certainly have some. Again, I went to my scrap box to find some roof vents and a kitchen stack. The vents also serve as handles to lift the roof. The instructions fail to mention adding the roof trim provided for roof caps. I went a step further, and added a front wall cornice to “Westernize” the kit. I also added gable trim to the shed addition.

Also, note that the cast steps attached to the foundation will probably break off during assembly (as mine did). They are easily glued back, but I decided to leave the front step off, because, as I imagine, a sidewalk may be added one day. Despite a few challenges, this kit was fun to assemble and resulted in yet another distinctive structure. The large wall sign for Gold Medal Flour really sets this building apart.