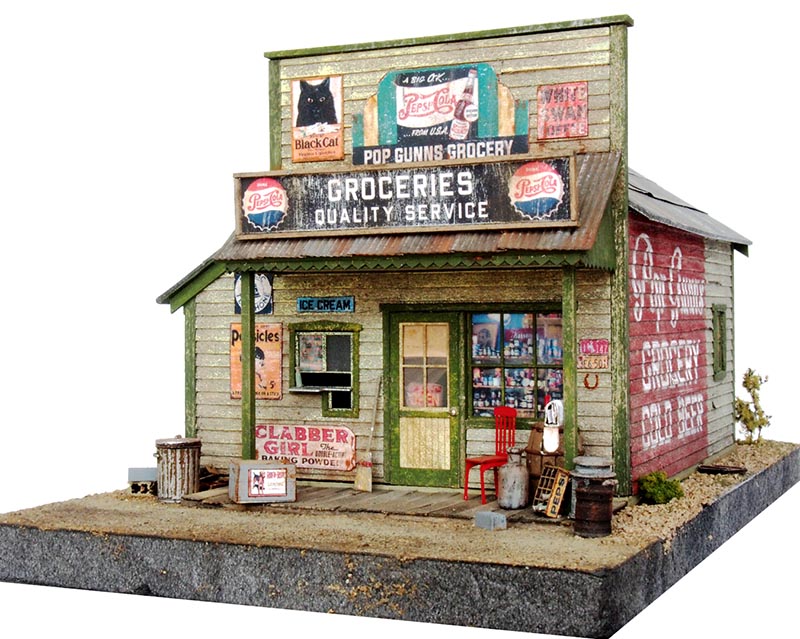 I needed a “push” to finally try O scale, and this little gem was what did it. Pop Gunns Grocery is named after a prototype market in Fresno, Calif., and is typical of small markets and grocers in the early 20th Century. The footprint is only 5 x 6 inches. Doug Foscale’s kits are beautifully designed, and reflect his architectural background. Assembly instructions were straightforward, and included detailed templates and bracing diagrams. They also explain finishing and weathering techniques to achieve faded and peeling paint effects, and rust. I kept the excess material to practice these painting and weathering techniques, and to try other color combinations.

The FOS website has several color photos of the pilot model – a big help when building and decorating this kit. Another feature of FOS kits is that you get to work with plywood, basswood, laser-board, card stock, corrugated wood roofing material, and various paper products. There are many details, and colorful signs. I completed all the walls flat on my workbench prior to assembly. While I don’t usually model nail holes in HO scale, they make sense in O scale, and I used my finest pounce wheel to make them.

There is a large laser-cut stencil wall sign that covers most of a sidewall, and it was fun to apply. A nice touch was including the laser-cut hash marks on the underside of the roof stock to mark the location of the rafter ends. Included are some great details – a straight-backed chair you assemble from four laser-cut pieces; a mailbox made by laminating several pieces of plywood, a die-cut red flag, pieces of mail cut from paper, and crates of bottles. The doors and windows are layered laser board glazed with acetate.

I primed the white metal detail pieces with paint from a spray can, and then painted the parts with acrylics, followed up with chalk powders. I am not a fast builder, since I like to enjoy the “ride.” So, it took me a week of evenings to assemble my Pop Gunns Grocery.