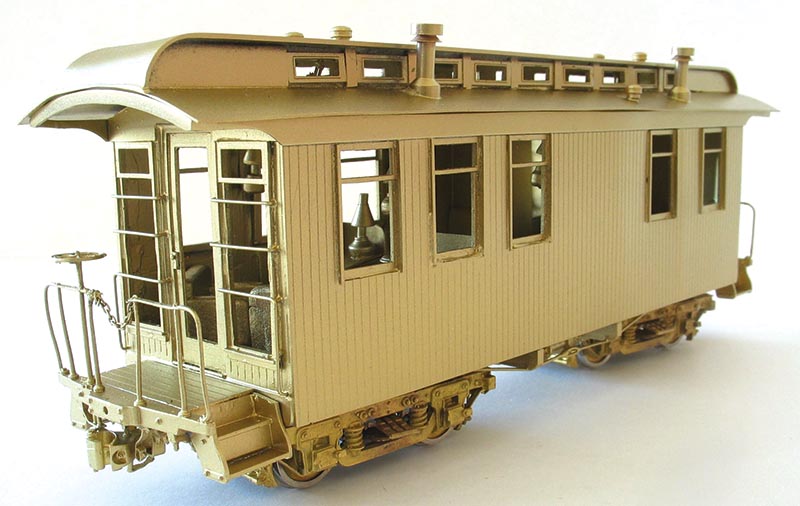 By Dan Windolph/photos by the author

In the early 1970s, I was introduced to Darrell Townsend in my local hobby shop. Darrell Townsend was the “Town” in Lee-Town Models, and a well-known modeler, specializing in brass. When I mentioned my interest in modeling in brass, we had a great conversation. During our chat, he told me about a set of brass castings he had commissioned Cliff Grandt to do for him. These castings would let him model C&S Business Car B-3, but Darrell said he had many other projects, and probably would never build the car. He mentioned in particular the “exquisite” brass castings of Cliff’s passenger car chandeliers.

Naturally, I expressed interest in that set of castings, and he agreed to sell them to me. Unfortunately, I never saw Darrell again, and it was some time later that a mutual friend delivered the small box of castings. Darrell and I hadn’t discussed cost, so I was a little shocked at the price for the small box of parts, but paid it after seeing the typical Grandt Line quality of the parts.

The box contained Cliff’s brass castings for windows, doors, clerestory windows, a potbelly stove, and those passenger car chandeliers – which were truly exquisite. Along with the box was a very poor copy of a plan for C&S B-3 drawn by Edmund Collins III in 1953.

I knew this was going to be a serious project, so I put the box on the shelf, where it stayed for almost 40 years (through a series of moves). A few years ago, I finally decided the time had come to build C&S B-3. I had accumulated a large stock of brass sheet, and rod and bar stock through the years, but still had to order etched, scribed brass sheet from Precision Scale Co. to build the car…