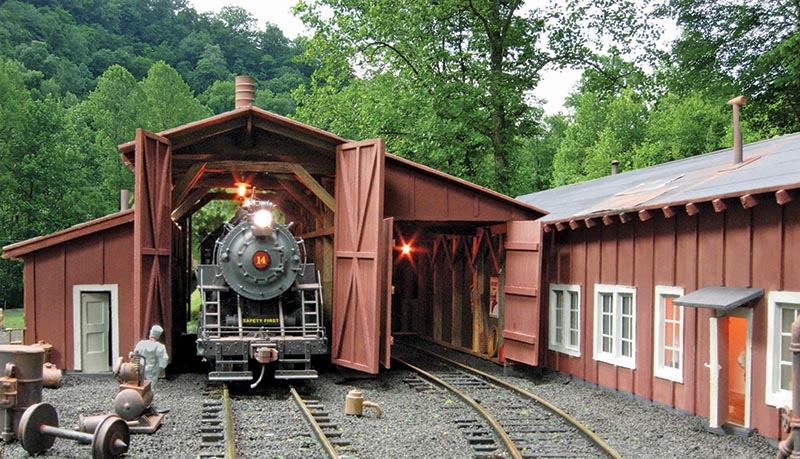 Buffalo Creek & Gauley no. 14 eases out of the author’s S scale Dundon engine house on a summer morning.

By Brooks Stover, MMR/photos by the author

The Elk River Coal & Lumber Co. of Clay County, W.Va., had, as the name suggests, both coal and lumber operations. The company was in business from 1904 until the holdings were sold in 1958. Steam operations ceased in 1965, but the line soldiered on with a tiny Plymouth for a couple more years. The headquarters of the ERC&L Co. were in the little town of Dundon, located about 45 miles northeast of Charleston.

It was in Dundon that the standard gauge Buffalo Creek & Gauley Railroad’s 18.6-mile-long, coal-hauling, short line owned by the ERC&L Co., had what employees called the “Dundon Shops.” The shops included a small complex of buildings, and a small yard where maintenance was performed on the BC&G’s modest roster of equipment, and where the maintenance-of-way rolling stock was stored. In its fi nal years, the BC&G operated three hefty Consolidations, and a Mack rail bus along with an even smaller FWD 4-wheel rail bus. Besides the engine house, the “shops” included a sand house, sand tower, and yard office.

The Prototype
The engine house was the main structure in the Dundon Yard. It was a modest wood frame building consisting of four parts. The main portion of the building was serviced by two tracks. One ran under the tallest portion of the structure, and just barely accommodated one of the Consolidations. This track passed all the way through the building, and extended about a locomotive-length out the back. There were doors on both ends of the building for this track.

The second track entered a lower portion of the building, and would just handle one of the rail buses. This track did not pass through the building. It seems to me that where the supporting posts must have been, there must have been very little room for the crews to work on the sides of a locomotive inside the shop. Adjacent to the large stall was the second part of the structure, an area under a shed roof that likely contained workbenches or at least work space. Above this section was a wall of windows providing filtered sunlight to the engine house. Attached to the opposite side of the engine shed were the other two portions of the structure consisting of a long machine shop and an open air storage area. 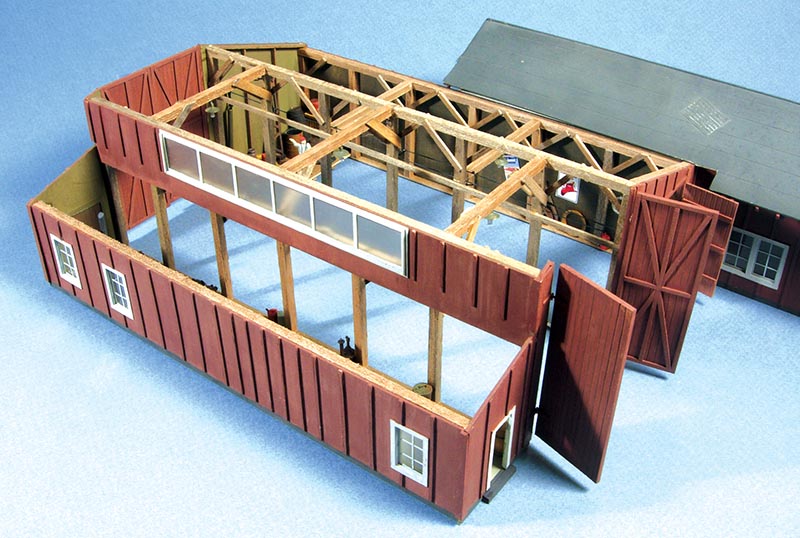 The author left the roofs of the engine house removable so that viewers could enjoy the detailed interior. The doors on both ends of the large stall are mounted on working hinges.

As far as I know, there is no information available about the history of the engine house. It appears in photos into the mid-1970s, but the date of its demise is uncertain. It was a classic short line engine house, adequate to do the job of keeping the railroads equipment in operating condition. The machine shop portion was well equipped, and the BC&G crews prided themselves in being able to do almost all the required maintenance on the locomotive and the steam crane boilers.

Besides repairs of the BC&G’s rod engines, major repairs of the ERC&L Shay and Climax used in the logging operation were also done here. This shop even completely rebuilt Climax #3 before she was sold to a tourist railroad near the end of operations. 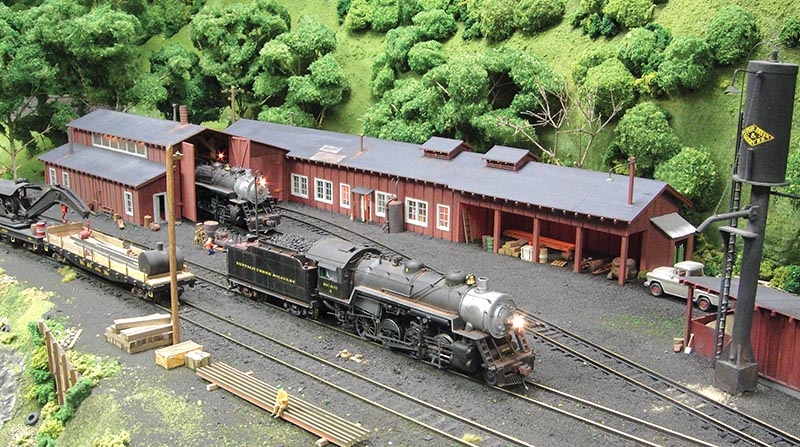 Locomotive no. 13 pokes its nose out the door of the engine house on the author’s S scale layout, while BC&G no. 4 simmers on the ready track.

The Model
Since I know of no drawings of the Dundon engine house with dimensions, I scaled my drawings using photos with doors, locomotives, and figures as references. The main engine house on my model is an uncompressed model of the prototype, but the machine shop and storage area were selectively compressed in length.