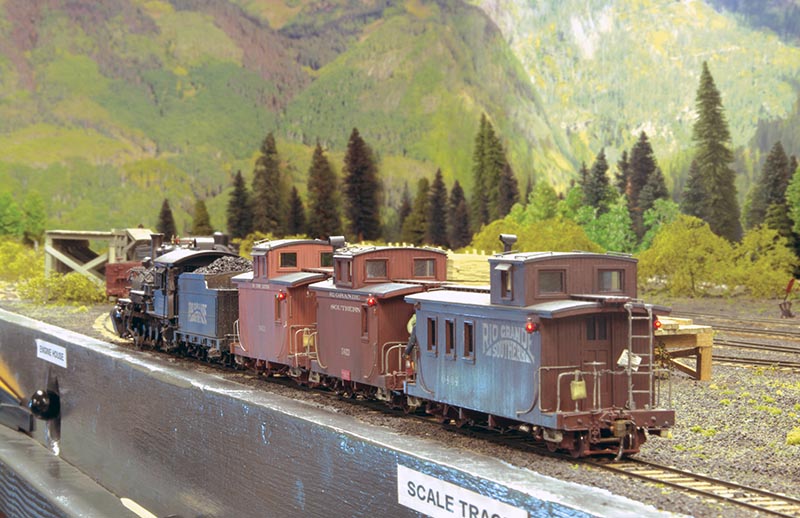 By Bill Busacca/photos by the author

In my article “Working Marker Lights for RGS Caboose #0400,” in the March/April 1998 GAZETTE, I described how I added a calculator battery to my Sn3 P-B-L Rio Grande Southern short caboose to power its marker lamps. The only problem with this was that after an operating session, or an open house, and a few beers, I often forgot to turn the marker lights off, and much later – to my chagrin, had to replace a dead battery.

Now, 19 years later, the digital/decoder revolution has changed our hobby. You can now buy Tomar Industries marker lights with 3- volt LEDs. These Tomar lamps come with a 2200-ohm resistor to protect the LEDs, and a small bridge rectifier that converts DCC square wave ACC down to 3 volts d.c.

I always mark a small red dot on the bottom of the truck at the grounded side, so I won’t reinstall them backwards. This also ensures that both trucks are picking up power from both rails. I also wrap ½ to ¾ of an inch of wire around a truck mounting screw before it enters the caboose frame to prevent metal fatigue on the wire.

I now have six RGS cabooses, and one D&RGW caboose fitted with LED marker and cupola lights. The only problem is that metal caboose underframes with metal trucks (even if they have fiber washers) want to short out. However, you can solve this problem with plastic trucks.