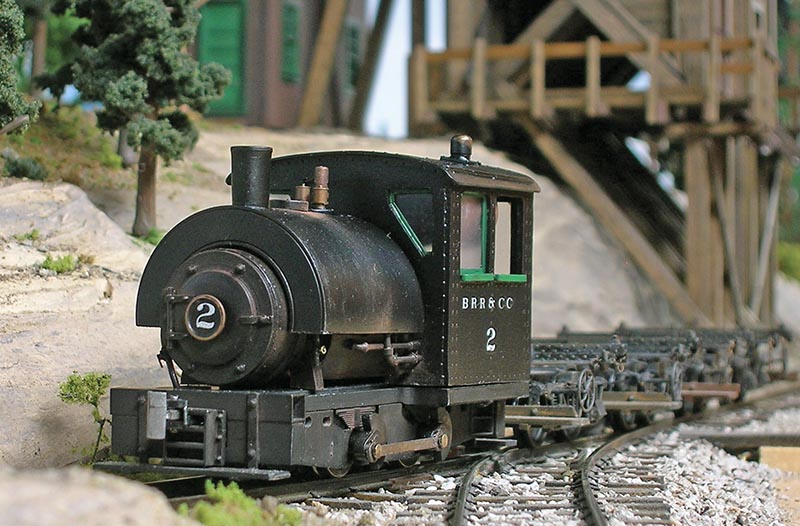 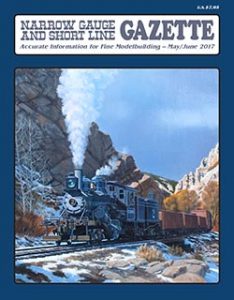 by Gary Bothe/photos by the author

In the May/June 1996 GAZETTE, Brad Smith described his 1980 visit to the Acme Brick Company, located near Barton, Wisconsin. Brad was primarily interested in the remains of a large Corliss stationary steam engine that powered the factory, but what fascinated me were the two photos of a little 0-4-0T steam locomotive the company owned. Other than these photos, I had almost no information about the locomotive. Brad wrote that he had spoken with a long-retired, former superintendent of the brick company who told him that the 0-4-0T, and its trailing hopper car were supposedly built in a local boiler shop, and that the locomotive was geardriven by steam cylinders hidden between the side frames.

In the July/August 1996 GAZETTE, the late Al Armitage published a set of plans for the Acme Brick Company locomotive based on the two photos and a meager description. But, in the November/December 1996 issue, letters to the Pigeon Hole from the late Al Armitage and Ed Gebhardt shed more light on this little Acme Brick Co. steamer. It turns out that she was not a locally made, one-off project, but was one of many such locomotives built by the Bell Locomotive Works, Inc. of New York City – a company that manufactured industrial locomotives between 1908 and 1920.

I was “out-of-the-hobby,” pursuing other interests when the GAZETTEs referred to above were published, and I only recently obtained them as back issues, so it has taken me a long time to discover Bell Locomotives. Today, some 20 years later, the reader can get a lot of information about Bell Locomotives from the Geared Steam web site. 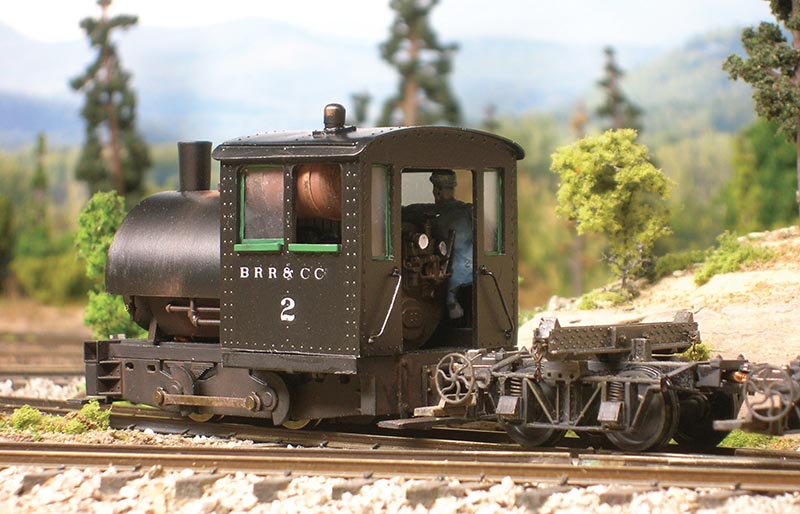 One day, while he was watching some small gas-powered contractor’s locomotives at a construction site, Bell became convinced that small steam locomotives powered by Stanley automobile engines would be ideal for that kind of work. This was the birth of the Bell Locomotive. These locomotives came in a variety of weights, designs, and sizes, and were powered by a two-cylinder Stanley steam engine driving one axle through reduction gears, with a gear ratio of around 2:1 – although customers could apparently specify several different gear ratios. Side rods transferred motion to the other axle.

The Bell and Stanley websites give engine cylinder dimensions of 3.25-inch-bore and 4.25-inch-stroke for the smallest engine used. The largest locomotive used two engines with 4.5-inch-bore and 6.5-inchstroke. Note that, those cylinder dimensions seem awfully small for a locomotive. But, the Stanley website reports that Stanley steam engines were actually capable of much more than the 10 to 20 horsepower claimed for automobile use, as long as the boiler could produce high pressure steam at the volume needed to sustain that power. In an automobile, that was not possible, but with a locomotive-sized boiler, it was not a problem. A 1917 article stated that the smallest Bell Locomotive had a tractive effort of about 1000 pounds – the ability to pull a 28-ton train. The largest locomotive the article mentioned, had a tractive effort of about 6000 pounds, and could pull a train weighing 171 tons. The reduction gears gave a mechanical advantage over direct drive to the axle. Top speed was in the 15 mph range.

The boiler in a Bell Locomotive was of the fire-tube type, but without a crown sheet. The fire tubes filled the entire boiler space – both above and below the water line – eliminating the need for stay bolts. The above-water tubes had the effect of superheating the steam for increased efficiency. The locomotives could burn a variety of different liquid fuels, fed from a cylindrical tank (usually hung from the roof of the cab opposite the engineer’s side) to an atomizer nozzle in the firebox. It was claimed that the locomotives could be fired-up from a cold start in about 20 minutes. To increase safety margins, the boilers were wrapped with three layers of piano wire, just as in the Stanley automobile. This, according to the company’s ads, made the boiler essentially “explosion-proof.” Admittedly, that sounds an awful lot like “famous last words,” but apparently the Bell boiler did live up to those claims. Boiler pressure was about 325 psi, but hydrostatic testing showed that leaks did not appear until 1200 psi, and boiler failure occurred only at 2200 psi. In addition, water level in the boiler could drop to as low as 31/2 inches before a fusible plug melted and blew out, preventing serious damage. No fireman was needed to operate the locomotive. In fact, not even the engineer needed to have special training. According to company promotional material, any competent “handyman” could learn to safely operate and maintain a Bell Locomotive after only a few days’ practice.

When I examined my information on Bell Locomotives, I realized that the running gear of many Bell Locomotives bore a striking resemblance to that of an On30 Bachmann Industries Davenport gas-mechanical. So I decided to see if I could use the Bachmann mechanism as the basis for an On30 model of a Bell Locomotive. Bachmann also sold a 1:20.3 scale version of their Davenport that could be converted into a large-scale model. 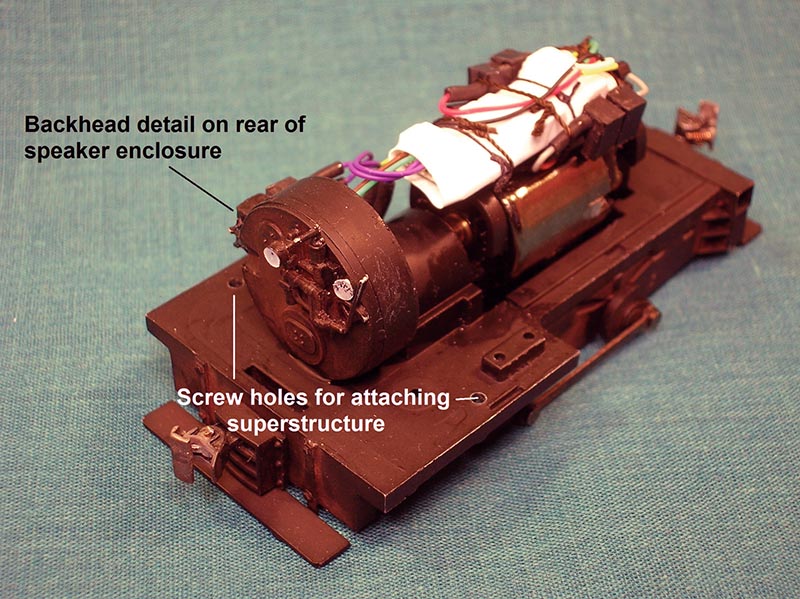 The first issues I had to decide were size and proportions. Bell Locomotives came in a wide range of weights, from 2 to 20 tons, depending on which source I read. There is no way of knowing the exact weight of the Acme Brick Company locomotive, although the boiler diameter seems large enough to put it in at least the middle of that weight range. Using guessed dimensions, and some “logical thinking,” Al Armitage apparently drew plans that presented the Acme locomotive in standard gauge, with a 6-foot wheelbase. Since the Bachmann gas-mechanical has a wheelbase of just a little over 31/2 feet, I was discouraged at first.

But, the more I looked at the photos of the prototype Acme Brick Co. locomotive, the more I became convinced that the dimensions on Al’s plans were oversized, because the engineer in the photos looked so hunched and cramped in his seat. If the wheelbase really was 6 feet, the cab height from floor to roof edge would also be about 6 feet, and the window openings would be over 21/2 feet high. This would allow the engineer to stand erect in the cab while looking out the windows, with headroom to spare. This is clearly not the case on Al’s plan. So, using a pair of dividers, and relying on some basic human body proportions (such as the distance from elbow to armpit being about 1/8 th of a man’s height), and assuming him to be 6 feet tall, I concluded that this locomotive’s wheelbase was actually much closer to 4 feet. And, it turns out that prototype information on the Geared Steam website mentioned above, validates this by putting Bell wheelbases in the 3 to 4-foot range.

So, starting with the assumption of a 4- foot wheelbase, the cab window openings on the Acme Brick Company locomotive would be about 2 feet tall, the front-to-back length of the cab 4 feet, and maximum headroom about 5 feet. This seemed right, since one of the photos shows that even while seated, the engineer had to bend over to get his head out of the window with his elbow on the sill. The Bell web site also states that depending on size, the locomotives were between 11 and 14 feet long. The Bachmann gas-mechanical measures about 12 scale feet over the end beams, right in the ballpark.

The only significant discrepancy between the dimensions given for Bell prototypes and the Bachmann chassis is width. Bell Locomotives were about 5 feet wide, and the Bachmann gasmechanical is about a foot wider across the cab. I decided I could live with this, because if I used cab width as a general starting point for proportioning the rest of the superstructure, I could justify a slightly larger boiler, which would accommodate a motor better. Bell Locomotives were “tiny” pieces of equipment, and the finished model is actually somewhat smaller in bulk than the Bachmann gas-mechanical. As an analogy, in a world of long haul 18-wheelers, a Bell Locomotive would be a pickup truck.

Another issue involved the frame. The Bachmann gas-mechanical has outside frames, while the Acme Brick Company locomotive had inside frames. But prototype Bell photos on the geared steam website show that outside frames were not unusual. By this time, I had moved away from the idea that my model would be an exact representation of the Acme locomotive – but rather – would be a representative Bell, inspired by the Acme locomotive. So, with all of the research, dimensional calculations, and rationalized compromises out the way, it was time to begin to build my Bell. 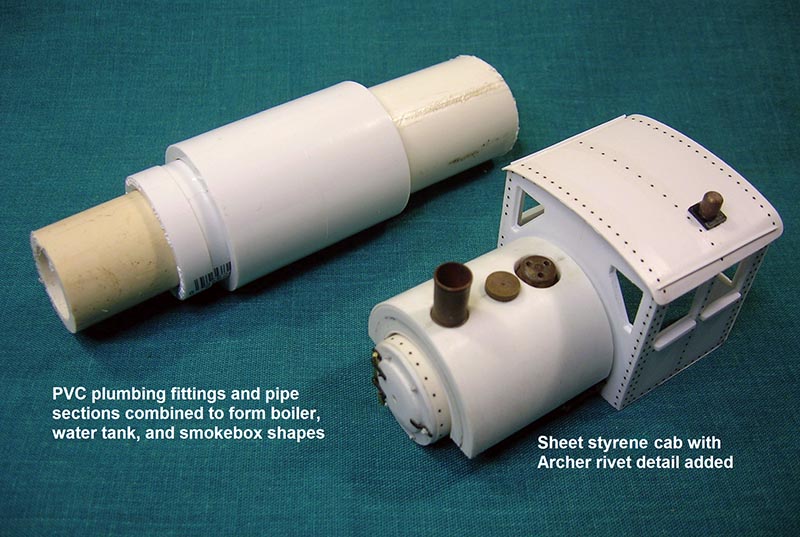 The first step was to completely disassemble the Bachmann locomotive, and set the body shell aside for another project. Then I modified the frame and deck in my Unimat (set-up as a mill). You could also do the job with a saw or with a Dremel tool, and file.

After modifying the frame, I reassembled the running gear, and installed a SoundTraxx Econami steam decoder and a 3/4-inch-diameter speaker (SoundTraxx #810053). I mounted the speaker enclosure (SoundTraxx #810109) vertically in the cab, with the speaker facing the front. If I were doing this again, I might use a 1/2-inch speaker to open up some more room in the cab. Sound volume and quality should not be an issue with a smaller speaker, because I imagine that Bell Locomotives were fairly quiet compared to locomotives with bigger cylinders – and I programmed my decoder accordingly. Bell Locomotives were extremely basic in design. There were no lights or air brakes. So, I hooked-up my decoder with two wires for pickup, two for the motor, two for the speaker, and a final connection to the keep-alive capacitor. I modified a Radio Shack connector to make plugs for connecting decoder wires to the chassis.

I selected the geared locomotive option for exhaust sound on the decoder, and adjusted the chuff rate to about eight chuffs per wheel rotation. This is in keeping with the 2:1 gear reduction common for the prototype Bell Locomotives. I also disabled the bell, air pump, dynamo, and anything else not seen on the Acme locomotive. 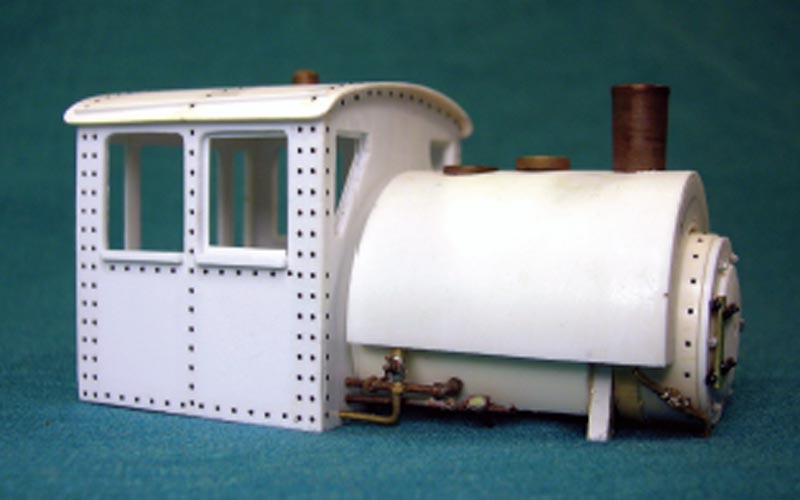 I made the boiler and saddle tank from PVC plumbing parts purchased at a local hardware store. PVC cannot be bonded using the solvent-type cement used for styrene, but ACC works fine, and the PVC parts were easily turned and milled into a boiler. However, if you apply heat, toxic fumes can be a problem. The smokebox front was turned from a PVC plug with brass and styrene door details and N-B-Ws added.

The cab was made from Evergreen styrene. Rivet detail was added with Archer rivet decals. The stack, water and fuel fillers, pop valves, and whistle were turned from brass. A brass fuel tank and cast metal engineer in the cab, plus some lead shot glued into the smokebox compensate for weight lost from milling down the frame. So, my finished model weighs about 7 ounces, about the same as the Bachmann gas-mechanical.