Colorado & Northwestern No. 2, a one-of-a-kind narrow gauge three-truck Climax, somewhere between Boulder, Colorado, and Ward, Colorado. The shop number of this locomotive was No. 167. Photo was most likely taken in 1898 as the locomotive arrived in Colorado in late December or early January and was sold to the Pacific Contract Co. in January 1899. —Photographer unknown, Bruce Pryor collection. 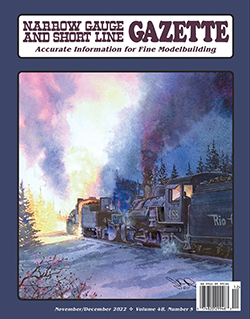 By Rob Bell/photos as noted

The White Pass & Yukon Route was built to serve the gold seekers of the Klondike Gold Rush of the late 19th and early 20th centuries. The WP&YR was really four companies, each chartered in one of the territories, plus the construction company. The Pacific & Arctic Railway and Navigation Co. was chartered to operate in the Alaska Territory (mile 0– 20.4). The British Columbia-Yukon Railway Co. was chartered for the operation of the section in British Columbia (mile 20.4–52.58). The British Yukon Railway Co. was chartered in the Yukon Territory (mile 52.58–112.0). The Pacific Contract Co. (PCC) was responsible for the construction of the entire WP&YR. The PCC acquired the first locomotives of the line second hand from several sources located in the Pacific Northwest, (Washington State and south-western British Columbia). When construction was completed, all locomotives and equipment acquired by the PCC would officially become property of the WP&YR. Perhaps the most unique of all the Route’s locomotives was the Climax 8.

The story of No. 8 starts many years before the Klondike Gold Rush in the Front Range of the Colorado Rocky Mountains. Gold was discovered on Boulder Creek just west of present-day Boulder, Colo., in 1859. Numerous mining towns sprung up, and silver was discovered in the area ten years later. By 1880, Colorado was reportedly the leading gold and silver producing state and talk of railroads was in Boulder’s air. The 3-foot gauge Greeley, Salt Lake & Pacific (GSL&P) was incorporated in January 1881 and was soon running 14.5 miles up Boulder Creek to the mining town of Sunset, Colo. Things went well until May of 1894 when spring rains and warm temperatures melted the mountain snows. Boulder Creek became a raging river washing out all the roads and railway bridges in Boulder Canyon, thus shutting the GSL&P down for good.

Citizens of Boulder sought to build another railway from Boulder to the various mining towns in the surrounding area and incorporated the Inter-Mountain Railway in April 1895. However, construction never began. The gentleman placed in charge of the inactive railway, M.F. Leach, proposed a tramway from Boulder to Ward, Colo. He managed to get financial backing from New York and Pennsylvania sources and the Colorado & Northwestern Railway Co. (C&N) was incorporated on July 22, 1897. The C&N took over all aspects of the inactive Inter-Mountain and construction began in August. The C&N did not follow the old GSL&P route, but rather a new grade was laid out on higher ground. The new route, slightly steeper with fewer trestles, was complete to Sunset, Colorado, in February 1898. The C&N continued laying ties and rail towards the mining town of Ward, Colorado. In late December 1897 or very early January 1898, the C&N took delivery of a most unusual 50-ton, three-truck locomotive from the Climax Locomotive Co. of Cory, Pa. 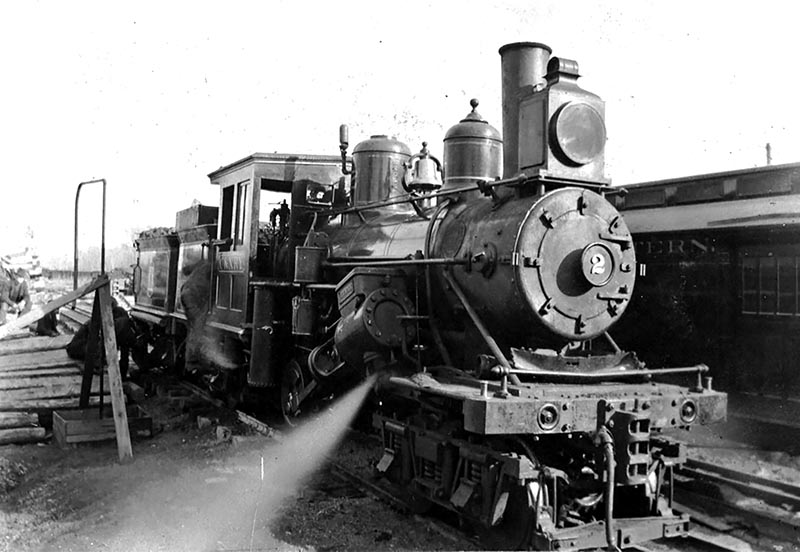 ABOVE: Colorado & Northwestern Climax No. 2 is shown here in the Boulder, Colo., yards ready for a trip up Boulder Creek. The locomotive is missing the pilot and the gear for the front axle can be seen. Photographer unknown, courtesy the Boulder Historical Society/Museum of Boulder, A.A. Paddock Collection

Colorado & Northwestern No. 2 was the heaviest Climax geared locomotive built up to that time and was the only narrow gauge three-truck Class “C” Climax ever built. Class C Climax locomotive cylinders were inclined about 30 degrees on each side of the boiler, driving a cross-shaft which was geared to a driveshaft positioned centrally under the boiler. This driveshaft was in turn geared to each axle on each truck using universals and bevel gears. The results were a locomotive that had tremendous tractive effort and an ability to operate around sharp curves and on steep grades albeit at a slow pace.

The C&N purchased No. 2 to handle heavy supply trains up to Ward, and the heavy ore tonnage from Ward to the Culbertson Mill a few miles east of Boulder. The Climax didn’t last long on the C&N as the line sold her in January 1899. No official reason was given for the sale, but Forest Crossen claims that “the crews knew one reason — too many derailments” in his book The Switzerland Trail of America. No matter the reason or reasons, the C&N sold the Climax rather quickly after acquiring it.

ABOVE: White Pass & Yukon Route No. 8 pauses with at least one flatcar behind loaded with men that appear to be shoveling something: possibly ballast. The track has ties that are faced only on the top and bottom and is not ballasted yet. The locomotive does not have a pilot or footboards, but it does have extension boards to increase the coal capacity. Photo by H.C. Barley, courtesy Skagway Museum, Dedman Collection (DCP0011)

The White Pass & Yukon Route was seven months or so into construction when PCC acquired the Climax from the Colorado & Northwestern for $3500.00. The crews on the White Pass apparently found the Climax quite capable on the steep and twisting rails out of Skagway. Pacific Contract Co. reported to the Climax Locomotive Company that they had “heard some good reports of the Climax Locomotive from our operating department at Skaguay. On the trial trip she pushed five loaded cars and a locomotive up our steep grades and sharp curves for a distance of ten miles, to the gratification of our people.” (Note the early way of spelling “Skagway”).

We know from photographic evidence that No. 8 was used mostly for construction trains, but also helped with bucking snow. Additionally, we know that Climax No. 8 was present when rails reached Bennett in early July 1899. The entire 110-mile railroad was completed in July of 1900 when all the locomotives and rolling stock officially became the property of the WP&Y. No. 8 was not relettered physically to No. 58 in 1900 when the White Pass & Yukon Route renumbered the rest of the locomotives similarly. It may never have been renumbered to 58 even on paper as a 1905 report referenced the locomotive simply as “Climax 8.” 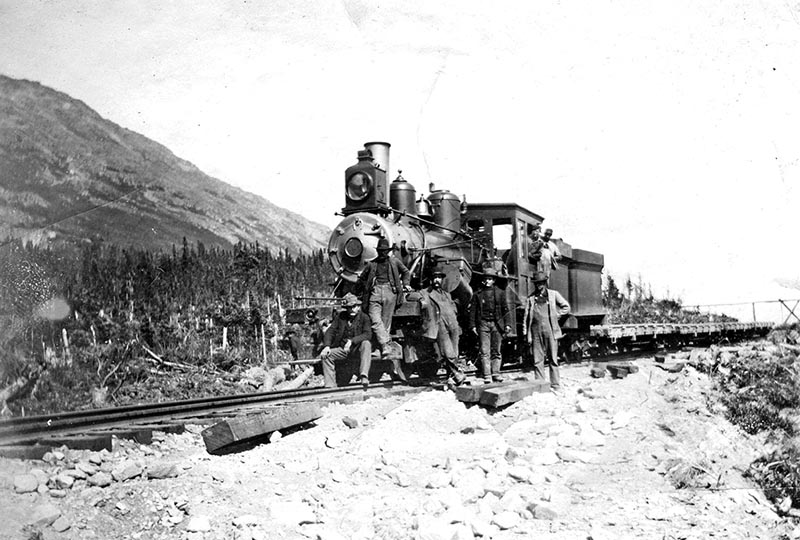 ABOVE: White Pass & Yukon No. 8 and her crew take a break with four flatcars in tow. The locomotive has footboards front and rear installed now, and the track has proper ties and ballast. One member of the crew can be seen heading into the brush just below the front-left of the locomotive’s end beam. Photogapher unknown, courtesy Skagway Museum, Talbot Collection (067)

The Climax remained on the property only until June of 1902 when the W.D. Hofius & Co., a dealer in iron, steel, machinery, and assorted railway supplies located in Seattle, Wash., paid the WP&Y $3000.00 for the locomotive. Sometime in 1903, Hofius sold the Climax to the White Brothers for use on their White Star Lumber Co. line out of Whites, Wash., as their No. 1. Either Hofius or the White Brothers removed the third truck and converted the locomotive to standard gauge. There has not been any good evidence that the Climax ever went to the Maytown Lumber Co. as has been reported by some sources. The locomotive was probably scrapped around 1916, but we just don’t know at this time.

This is the story of a one-of-a-kind narrow gauge, three-truck Climax that had her roots in the Colorado Rocky Mountains and the associated gold rush there. The locomotive also saw service because of the Klondike gold rush in the Alaska Territory and nearby Canada. The Climax was apparently more successful on the WP&YR rails in southeast Alaska, yet she didn’t last long there either. She ended her days in Washington state hauling logs and lumber in obscurity, her final days lost to the mists of time. While the story of this locomotive is anti-climatic, however this is the story of the Climax of the White Pass & Yukon Route. 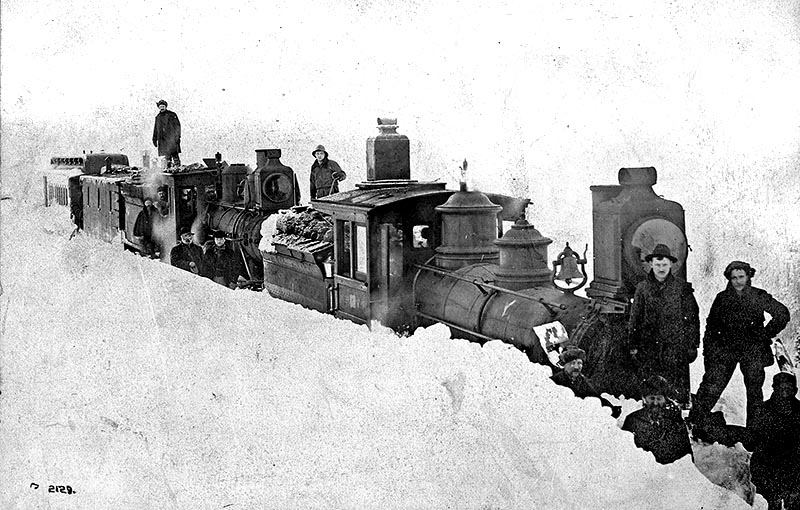 ABOVE: White Pass & Yukon Route Climax No. 8 and No. 4 (a Baldwin 4-4-0, see part 3 of this series) take a break from plowing through some deep snow somewhere on the line. The snow was often deep enough that the only way to clear the rails was to employ men with shovels to reduce the depth to a point where the locomotives could handle it. Many times, this was the case even after the arrival of the big rotary snowplows. Photographer unknown, courtesy Klondike Gold Rush National Historical Park (KLGO)

The accompanying drawings by David Fletcher of this Climax aren’t the first to be done; but I believe them to be the most accurate to date. Drawings of this locomotive appeared in the September 1964 Model Railroader. However, that drawing had many errors including headlight mounting position and the wheelbase of the third truck. Another drawing of this locomotive appeared in the November/December 1993 GAZETTE, the most notable issue with this one being the position of the third truck under the tank. A close study of prototype photographs and comparison of the different drawings and I think you will agree that David’s are the most accurate so far.

Once again, I would like to acknowledge the contributions of Boerries Burkhardt, David Fletcher, Robert Hilton, Chuck Morse, Bruce Pryor, and John Stutz for their assistance. Next time, I will explore the White Pass & Yukon Route’s main class of motive power for forty years, accompanied by more drawings from David Fletcher.