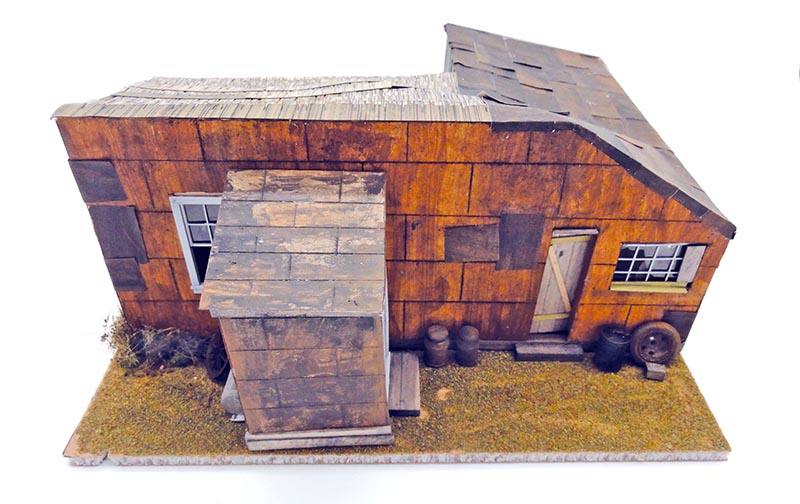 I was attracted to the challenge of recreating the look of weathered flattened tin cans, planks, and tar paper held in place with battens, not to mention the squashed down roof 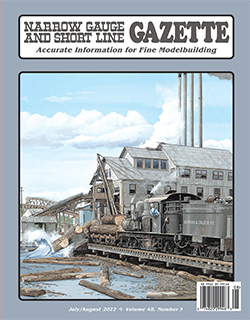 When I saw the name of the Bodie, Calif., building Neil Pfafman had drawn for the May/June Gazette I was immediately interested. Who wouldn’t be? Dog Face George, what a name. I was attracted to the challenge of recreating the look of weathered flattened tin cans, planks, and tar paper held in place with battens, not to mention the squashed down roof covered with flattened tin cans and wood shakes. Quite a challenge. I looked at several articles on trying to achieve the color of rusted tin, and checked with Neil about the wood shakes, but my research yielded little on Dog Face George. I did locate a photo on the Internet of the building as it looks today.

After scaling Neil’s HO scale plans up to O scale, I cut out inner walls from 1/16-inch-thick sheet basswood, being careful to get the dimensions right so the roof would sag correctly. I decided to cut outer walls from manila file folders and scribe them to represent tin sheets. I colored them with MicroLux Rust and Engine Black, by simply daubing on the colors by dipping the brush in the rust, then the black and swabbing them on. About every three inches I wiped the paint off with a soft cloth giving me a nice affect. The doors and windows were either built-up or from my scrap box. 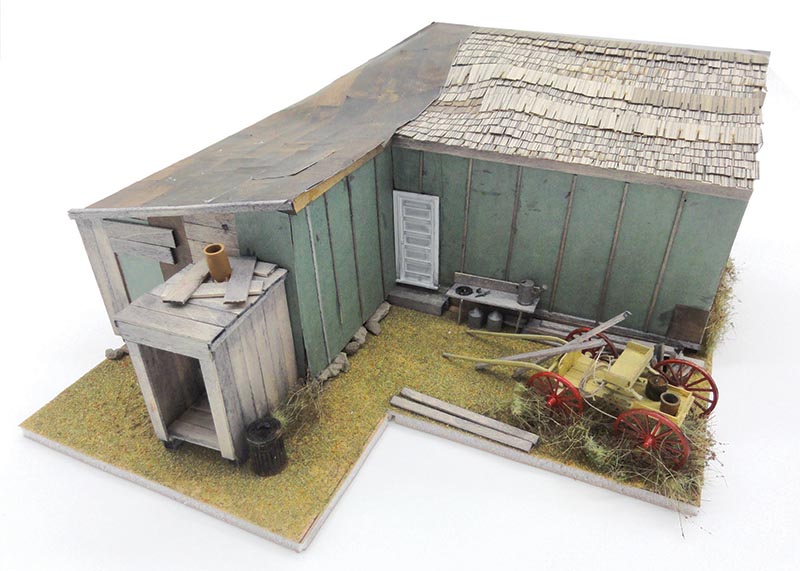 The tar paper is colored paper with thin strips of basswood for battens. I was concerned about the roof and laid the building down on some thin cardboard, tracing around the edge and cutting out the roof. Amazingly it all fit, and I glued it down and left it overnight under weights.

The next day I added Wild West Scale Model Builders shakes to half the roof, and sheets of paper “tin” for the other half. I colored a piece of quality bond paper with MicroLux Rust and Engine Black just like I had on the walls, but went heavy on the Black. I also used my wiping techniques to spread the paint. 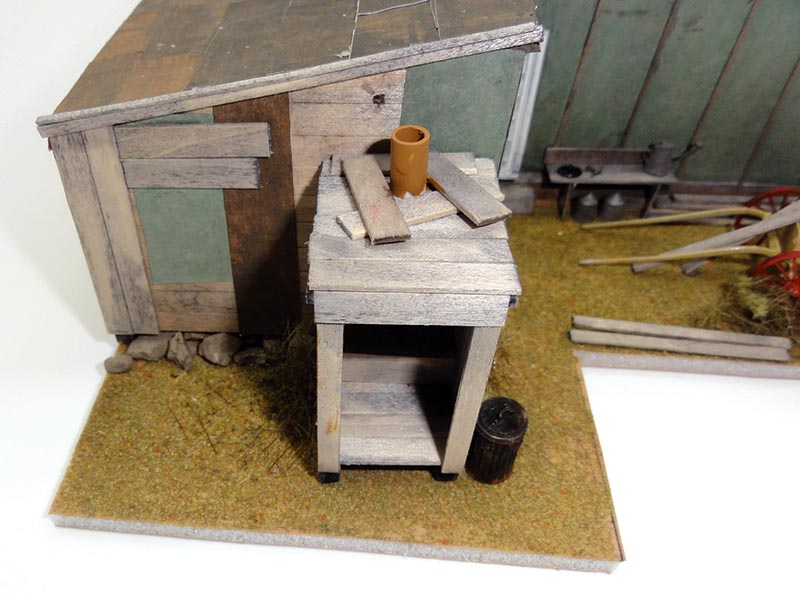 Then I cut the paper into scale 2- x 3-foot pieces and glued them in place. I was even able to fold the “tin” sheets over at the edges of the roof.
The little rear wall has a privy that I built up from strip wood. Then I glued down some Woodland Scenics ground foam to a base of Gatorfoam and glued my Dog Face George building in place. I detailed the building with old tires, garbage cans, oil drums and a Berkshire Valley Buckboard.

I am really satisfied with my model. I think I captured the look of the prototype and it inspired me to build the Bodie Jail (November/December 2017 Gazette) and U.S. Bakery (May/June 2022 Gazette) from Neil Pfafman’s excellent plans. After all, isn’t that what they are for?