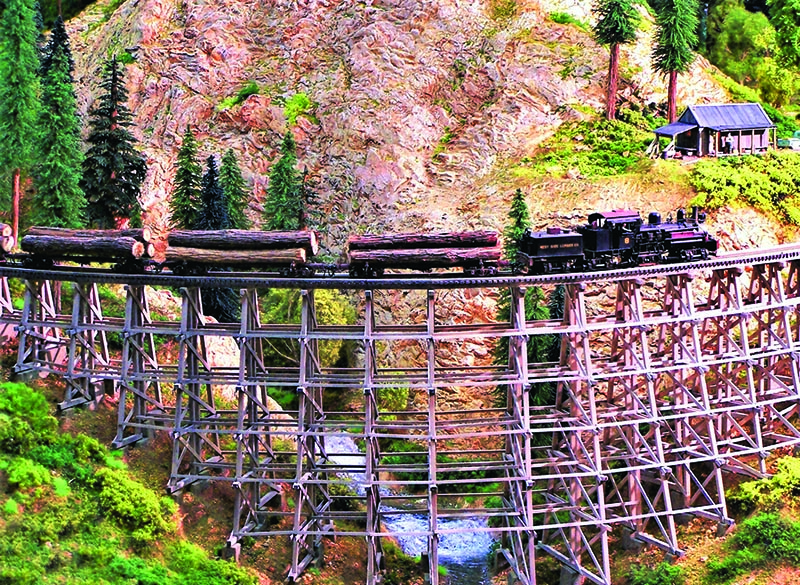 The West Side Lumber Company had several high trestles. While the author did not model a special trestle here, his model evokes one of them. The rockwork behind the bridge was cast in Plaster of Paris using many molds.

Vinny Pellitteri/photos by the author

In 1984, after modeling primarily HOn3 steam railroads for many years, I suddenly discovered, after reading several books on the subject, primarily West Side by Mallory Hope Ferrell, I had become a logging railroad enthusiast. I was attracted to logging by the geared motive power, the often home-grown rolling stock, the abundance of beautiful, serene and lush scenery, as well as the steep grades and tight curves, which are more easily modeled in our always “too little space.”

Luckily, at about that time P-B-L was introducing a new line of Sn3 West Side Lumber Company Shays, which further convinced me to move forward with an Sn3 logging layout. These locomotives are beautiful, highly detailed, and run like the proverbial Swiss watch.

Over the years P-B-L has produced every Shay and Heisler the WSLC actually had, and then some. The “and then some” refers to a locomotive I was able to special order WSLC #11, which never existed, but could have. Besides the beautiful locomotives that have been produced, several manufacturers have produced ready-to-run models and kits for WSLC rolling stock in Sn3. Likewise, there are many structure kits that are modeled after WSLC prototypes, or simply fit the theme very well. 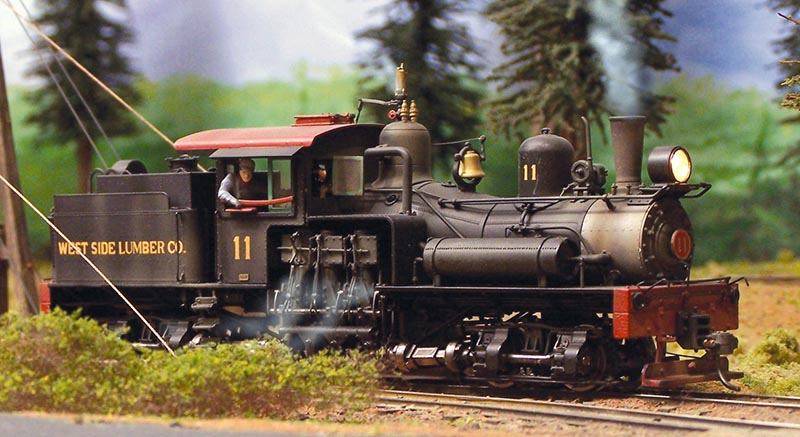 ABOVE: Number 11 is one of several P-B-L Shays running on the author’s layout.

It was pretty clear to me that this was a project that would keep my interest for many years to come, and it has.

Layout Concept
My primary goal was to construct a lay-out that would capture the “flavor” of the prototype, but not be a “boring logging layout.” As I learned more about the actual operations of the West Side, I realized that there were opportunities to model more than just the logging operations. The West Side interchanged with the Sierra Railroad in Tuolumne. In the drying yard, standard gauge boxcars were loaded with lumber for delivery to places as far away as the east coast. The Sierra also delivered needed commodities to the West Side, including oil, sand and consumer goods. I realized that a dual gauge layout was a must if I wanted to incorporate all that action. 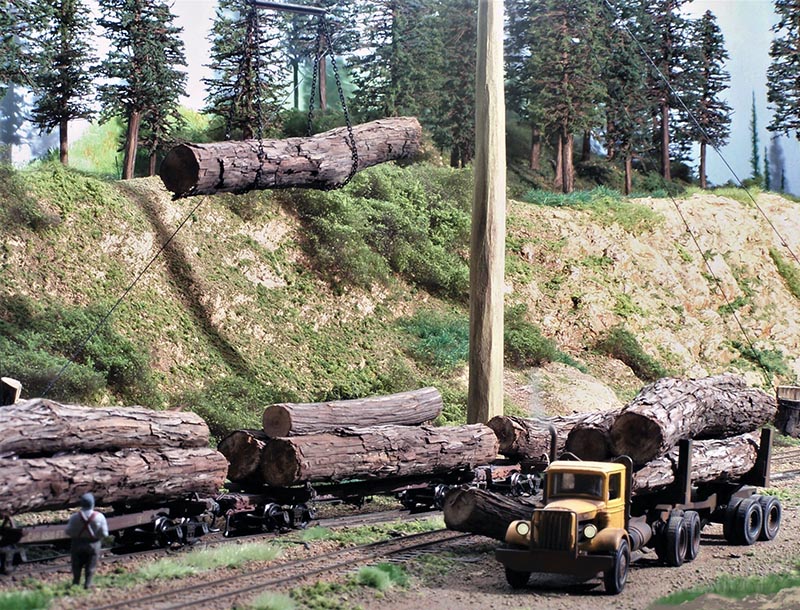 Above: Re-loads were common on the West Side. Here logs are being moved from log cars to a truck for the trip down to the Tuolumne sawmill.

Before I put pencil to paper, I developed a set of standards that I adhered to during the design and construction phases. Their purpose was to insure I did not lose sight of my goals. First, the track plan had to provide interesting and challenging operations. Second, adequate space had to be allowed for dramatic, realistic and detailed scenery. Third, aisle space had to be a minimum of three feet. And finally, the minimum radius curves would be no less than 28 inches, with 21/2 inches between all parallel tracks, and #6 turnouts. As it turned out, most curves are 30-inch radius or more.

The design attempts to capture the essentials of the West Side operation, but certainly not all of it. To do that, many scenes where altered to meet space and scenery requirements…

Read the rest of this story in the March/April 2020 issue of Narrow Gauge & Short Line Gazette!