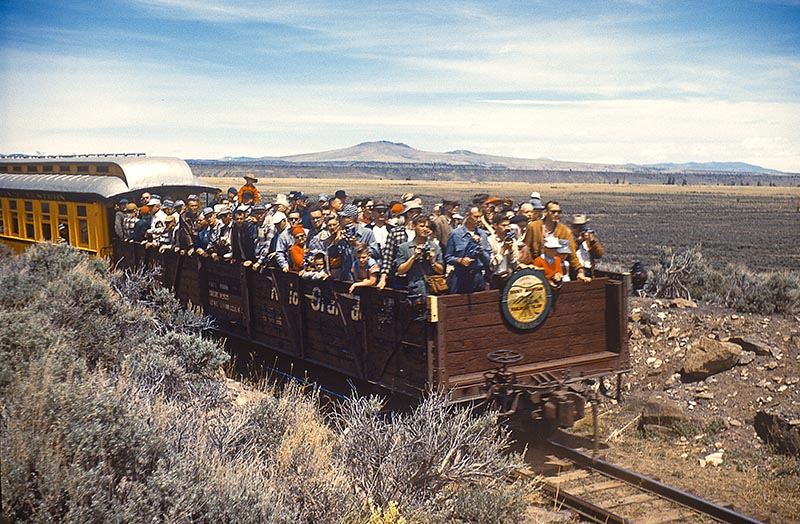 The Rio Grande delivers another load of narrow gauge railfans… An excursion approaches Lava Tank in 1958 as eager riders enjoy the view from the open gondola. In 1956, a 9600-series pipe gondola (a cut-down and retrucked outside-braced 1916 standard gauge boxcar) was added to the train to accommodate those who wished to drink more deeply of the thin, slightly coal-smoke-flavored mountain air 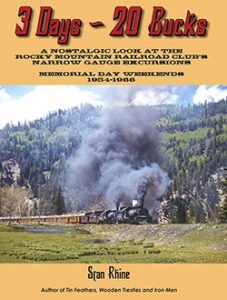 Here, once again, on the former Fourth Division, the narrow rails, the wooden cars and the iron men put the Rockies to rout. The track serpentined back and forth, scrambling for every foot of altitude, looping past Lava Tank, past the Big Horn section house (and past it again, then slithering around Whiplash Curve to pass it a third time), past Sublette, the curves squeezing down to 20 degrees, the elevation steadily increasing. 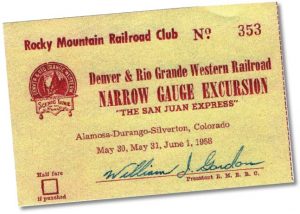 In 1956, a 9600-series pipe gondola (a cut-down and retrucked outside-braced 1916 standard gauge boxcar) was added to the train to accommodate those who wished to drink more deeply of the thin, slightly coal-smoke-flavored mountain air. Back on this open gon that functioned as the tail car, parlor car Alamosa having been demoted for the trip to the penultimate position, Conductor Alva Lyons was in fine fettle. The popular, jovial conductor stood, legs slightly spread against the swaying and rocking of the car. As usual, he was surrounded by a gaggle of attentive railfans, to whom he was reeling off narrow gauge history, narrow gauge anecdotes and narrow gauge scenic delights.

The train wound through the soaring spires of Phantom Curve. “Over there,” Al grinned, pointing at one of the largest of the hoodoos, “that’s the Brigham Young Monument.” Folks from back east looked puzzled. The ones from the west guffawed. 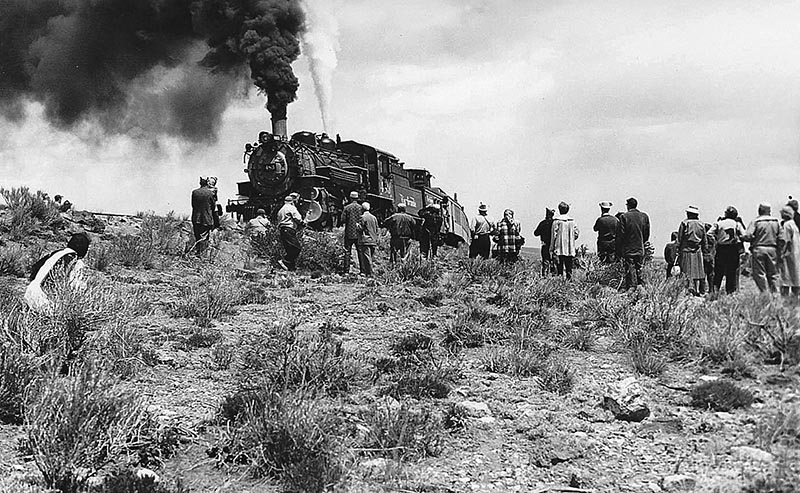 This 1960 shot appears to be taken at a run-by near Sublette. Jimmy Blouch photo

Narrow Gauge Motel’s co-owner (and later the Colorado Railroad Museum’s), “Uncle” Bob Richardson, a couple of his “moppets” trailing behind, slowly made his way down the constricted coach aisles toward the rear of the train. His progress was frequently interrupted by Club members and others who hailed Bob for a bit of conversation or the answer to a question. Like Al Lyons, Bob was rarely—if ever—at a loss for an answer. We often wondered if he really knew as much as he seemed to, or was amiably faking an occasional response. But as far as we could ever discover, Bob, even more than Al, possessed a bottomless neurological filing cabinet of railroad information with an instant access that would make any operator of those hulking, room-filling, vacuum tube computers envious.

Bob finally made it back to the gon. Looking up, Al Lyons, whose voice got louder as the crowd got larger, saw him coming. The conductor had been stalled there for a long time and was itching to make another pass through the train. He raised an arm. “Say, Bob,” he boomed, “take over here, will you? I’ve just about run out of lies to tell these folks.” 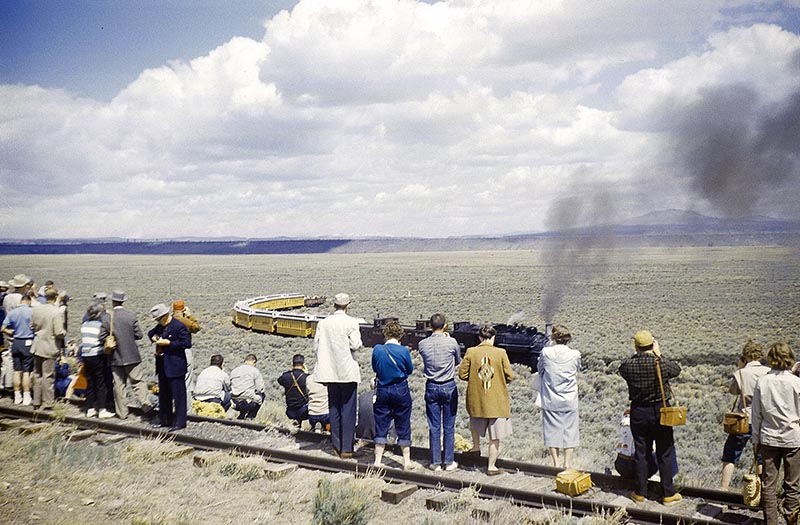 As though it were a vacillating suitor attempting to choose between the abundant charms of Colorado and New Mexico, the D&RGW’s alignment zigzagged across the 37th parallel (Colorado- New Mexico border) eleven times between Alamosa and Chama. Small signs next to the track informed the photographer whether he or she was taking pictures of Colorado or New Mexico. No matter. The folks at their next slide show would o-o-o and a-a-h at the rugged mountain scenery whichever side of the border it was on.

The train made a brief San Juan-inspired stop outside the smoking mouth of tunnel two, the Rock Tunnel. Between the track and the abyss stood the Garfield Monument (Milepost 315.32, named for the former president; the cartoon cat hadn’t made his debut yet). Beyond the monument lay the awesome declivity of Toltec Gorge, the Los Pinos River foaming silently along in its depths. Scads of film were burned, some of the monument itself, a tribute to the assassinated twentieth US President, James A. Garfield, and dedicated by a convention of railroad passenger agents who reached this rocky rim of Toltec Gorge in 1881. 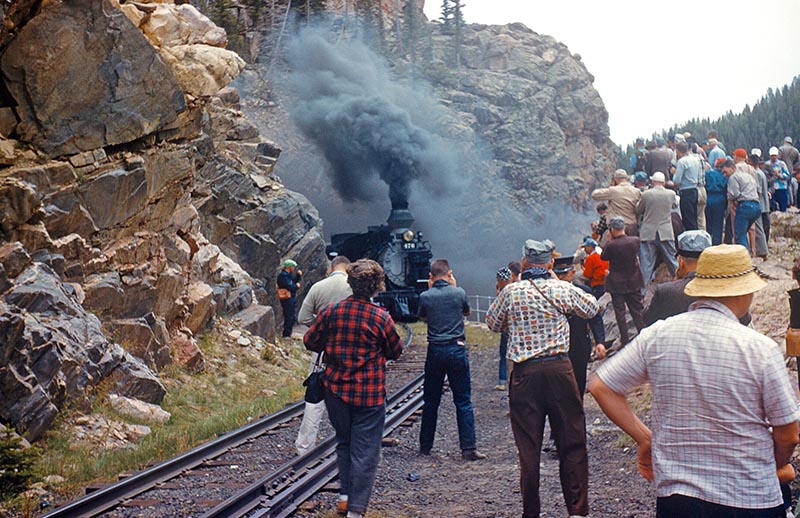 Delighted railfans crank off shot after shot as K-28 476 emerges from tunnel No. 2, the “Rock Tunnel.” By the time the tender rolls past, at least one photographer will have discovered he’s at the end of the roll. Time for a hasty rewind and reload.

Another three miles brought us back into Colorado again, and to Osier. The treeless upland mesa of Osier station was another water stop. The sun continued to shine brightly, but the air was noticeably cooler here at 9,637 feet than it had been back down in Alamosa. The bravest of the spring flowers had already begun poking their heads through the soil. Yet, snow still clung doggedly to depressions and gullies, and rivulets of snowmelt water gurgled downhill across spongy ground.

Leaving Osier behind, the track curved back above Cascade Creek, crossed high, steel Cascade Creek Trestle and continued climbing along the escarpment above the Los Pinos River. Around here, the rail again became heavier; 85 lbs. per yard, clear to the Chama Yard limits…

Relive the glorious heyday of Colorado narrow gauge railfan trips with your copy of 3 Days – 20 Bucks!