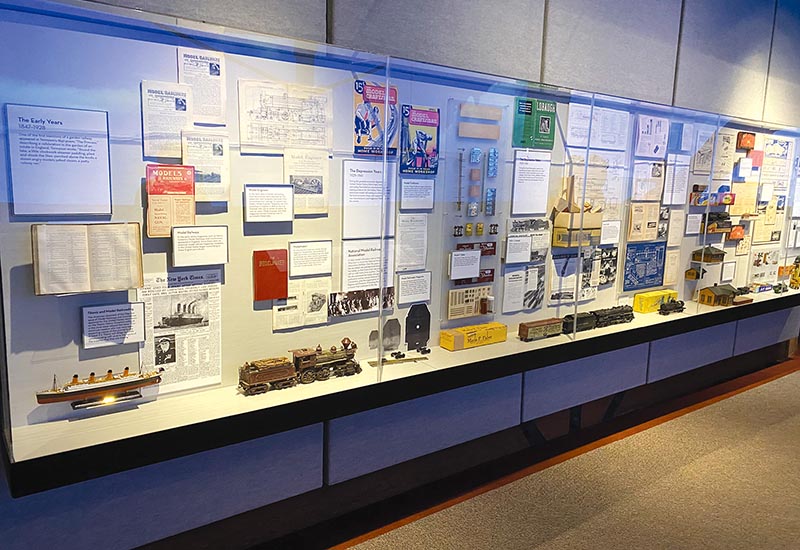 The Early Days at the start of the Timeline portion of the NMRA Magic of Scale Model Railroading exhibit at the California State Railroad Museum in Sacramento. Note the open copy of Tennyson’s poem, “The Princess.” The early magazines, the Titanic model, and a big 4-4-0 model which has no motor and was pushed around the layout. There was a third rail for the headlight and a firebox glow. I was told the layout it came from was built in the early 1920s, and was operated to a timetable with car cards, all by pushing the locomotives along by hand. 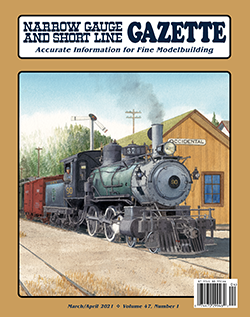 No, I don’t mean My Eureka Mill Railroad, I mean the NMRA’s Magic of Scale Model Railroading exhibit at the California State Railroad Museum in Sacramento. After some 16 years it is ready to open subject to the whims of COVID-19. Charlie Getz brieﬂy describes the exhibit, its history, and the narrow gauge on display, on page 90. Here I want to describe one of the main exhibits that I am most proud of — the Timeline.

The Timeline runs along the curved Gallery wall in two 20-foot-long glass cases about 36 inches high and 12 inches deep. What makes it unique is that we divided it into eras and used artifacts to illustrate each era. There are some 400 artifacts such as kits, magazines, plans, and completed models, many quite historic to illustrate each era. I can’t go into great detail here so, you will have to come and see the exhibit, but let me describe some of my favorite parts of the Timeline and show some photos.

The Timeline starts in the Early Days with a quote from a book-length Tennyson poem titled “The Princess.” It was published in 1847, and one stanza describes a garden party at a large estate (think Downton Abbey), including various attractions such as a hot air balloon, ﬁre eater, magician, and a “pretty little steam engine pufﬁng around the garden.” A garden railway? I wonder? 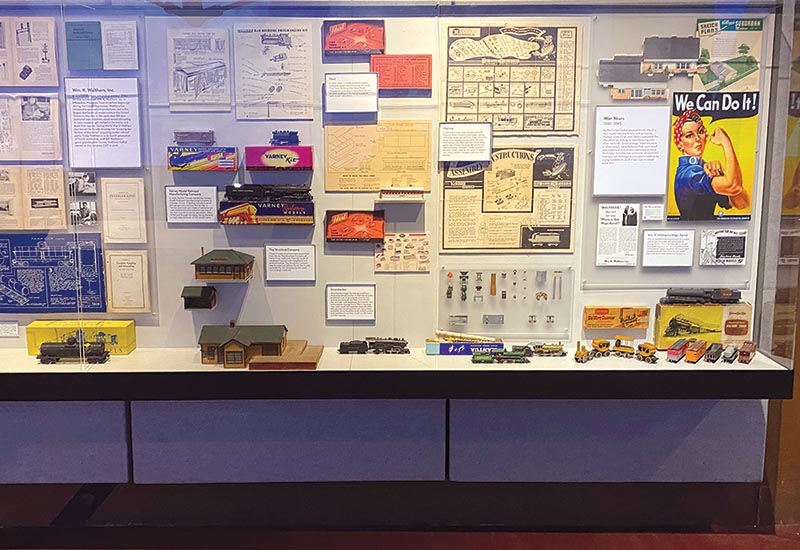 The end of the Depression Years and start of the War Years. Note, on the right, how the Mantua Mogul has been spread out with the instructions, parts, and completed model. Also note, at the bottom, the Strombecker wooden kits, and the “Rosie the Riveter” poster.

Next, we have several English model railway magazines such as Model Railways, and Locomotives. American modelers were reading this magazine. They were shipped by steamship, and the April 1912 issue went down on the Titanic. Remember the next time you see Kate Winslet in the 1997 ﬁlm “Titanic,” that there is a little package of model railroad magazines down there in the mail room. Yes, we have a model of the Titanic, and editor Henry Greenly’s apologetic editorial to his American readers.

The United States’ ﬁrst model railroad magazine, The Modelmaker, ﬁrst published in 1924, is followed by the Depression Years. During the worst depression in our history, the hobby boomed. The Model Craftsman (now our sister publication Railroad Model Craftsman) first appeared in March 1933 (I was three months old), Model Railroader followed in 1934, and the NMRA itself was founded in 1935, all illustrated with rare and interesting artifacts. Major manufacturers also got started during the Depression such as Varney, Mantua, Lobaugh, Scale Craft, Walthers, Westbrook, the Structure Company, and many others are all illustrated with kits and models. Some of the kits have been broken out and displayed so you can re-ally see what modelers in the Depression Years had available. 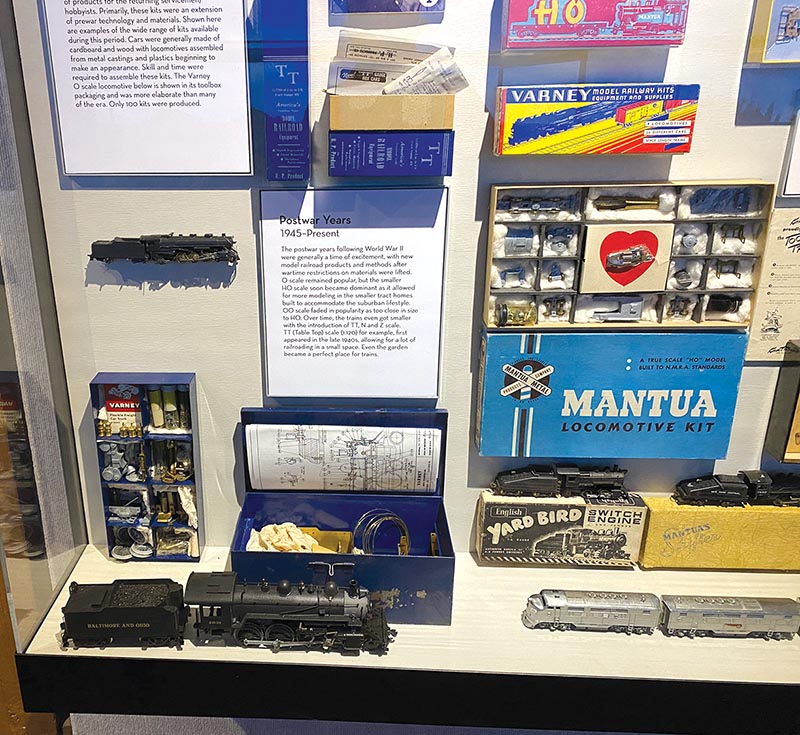 The Post War Years with a Varney O gauge 4-6-0 kit in a metal toolbox behind a completed 4-6-0. Also note the HP Products TT scale kits.

The War Years are next, with several wood Strombecker wooden kits, other paper kits, and, of course, a Rosie the Riveter poster. The Post War Years are next, and were bountiful for modelers who were anxious to get back from the war and get modeling again. HP Products started TT gauge, and Varney produced a beautiful O gauge Baltimore & Ohio 4-6-0 kit. The ﬁrst 100 kits came in a metal toolbox. We have an unassembled kit nicely spread out, and an assembled model from the NMRA collection.

We call the next era, the Brass Revolution. Right after the war, several small Japanese factories began building brass locomotives to order for the GIs. Our exhibit has an On3 C&S Mogul built for a naval Commander and brought home. There are also several examples of other brass models, and a set of nine gold-plated locomotives presented to Bill Ryan of PFM by his builder, in thanks for his business. These very rare models, along with most of the brass models on display, were donated by brass collector Reid Dennis. 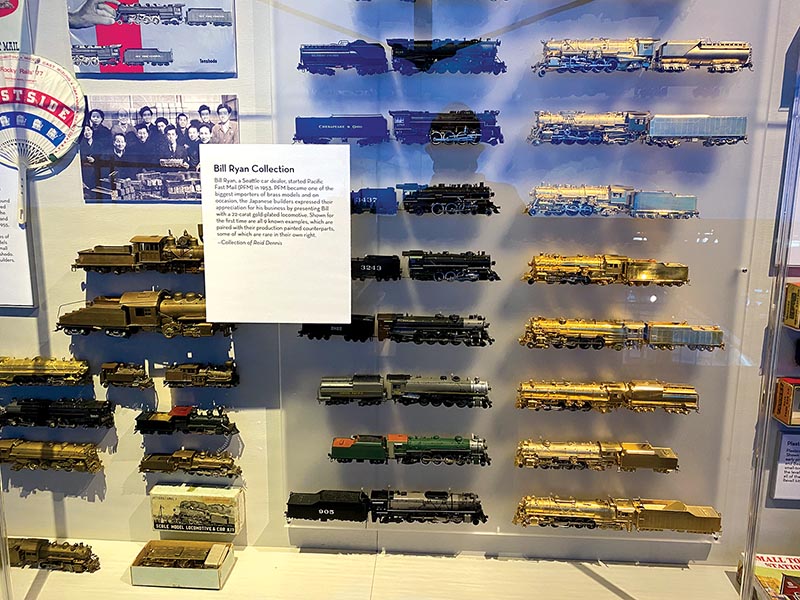 The Brass Revolution with the rare gold-plated locomotives presented to Bill Ryan of importer Pacific Fast Mail (PFM) by his builder in thanks for his years of business. There are nine, and are all on display, but I cut off the top one in my photo. So, you see only eight. Each gold-plated model is facing a sister painted version.

Next comes the Plastic Revolution with examples of the use of plastic in our hobby, and how they changed it, followed by the Digital Revolution with its laser-cut parts, detailed craftsman kits and DCC. We even have a PFM sound system alongside a DCC system to illustrate electronic development.

So, that’s the end of the Timeline, but I have not been able to describe all of it. After all, I did say there were some 400 artifacts. Please come and see the Magic of Scale Model Railroading exhibit in Sacramento as soon as COVID-19 will let you.

This article appeared in the March/April 2021 issue of the Narrow Gauge & Short Line Gazette. Subscribe Today!